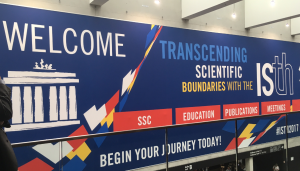 There was standing room only when the first data from the GARFIELD-VTE Registry was presented during the Thrombosis Research Institute (TRI) satellite symposium on Wednesday 12th July at the International Society on Thrombosis and Haemostasis (ISTH) Congress 2017. The congress took place in Berlin from Saturday 8th to Thursday 13th July, during which the GARFIELD-VTE data was also showcased at an oral presentation and three poster presentations – one of which was awarded an ISTH Congress rosette – and on the TRI exhibition booth.

The booth showcased the work of not just the GARFIELD-VTE Registry but all of the registries and studies conducted by the TRI, including the Frontline 2 thrombosis and cancer survey http://frontline2.tri-london.ac.uk/. 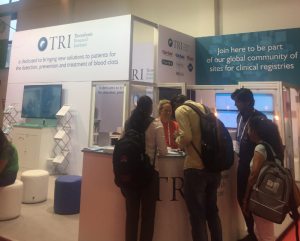 On the Monday, Professor Weitz’s poster showed the differences observed between the clinical characteristics of VTE in patients with and without active cancer or a history of cancer. His conclusion was that the majority of VTE patients with cancer are treated with low molecular weight heparin (LMWH) monotherapy, in keeping with guidelines, although some are prescribed direct oral anticoagulants (DOACs).

On the Tuesday, there were two posters in the same poster session. Professor Turpie presented 6-months outcomes data showing that death was the most frequent major adverse outcome in patients with VTE, with half being cancer-related. The last of the posters, presented by Professor Sylvia Haas, was by no means the least. Entitled ‘Anticoagulation treatment patterns of venous thromboembolism in GARFIELD-VTE patients’, it was awarded a rosette for being a top scoring poster. In her conclusion, Professor Haas explained that there was a clear shift from conventional parenteral plus VKA treatment in the first 30 days towards DOACs in the following 5 months, raising the question about whether DOACs have become the new standard of care for chronic anticoagulation. 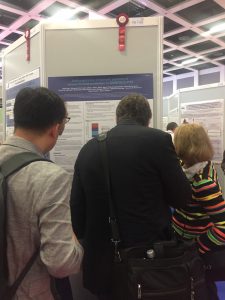 Professors Turpie and Haas were joined by Professor Mantovani during the poster session and all three provided their perspectives on the GARFIELD-VTE data in discussions with delegates who came to view the posters.

On the penultimate day of ISTH 2017, members of the GARFIELD-VTE Steering Committee presented the registry’s initial insights on the management of VTE. In a room filled beyond capacity, topics included: characterising patients and their treatments, anticoagulation management strategies, cancer-associated thrombosis and outcomes in the real world. 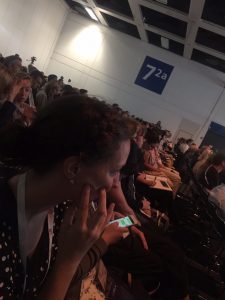 Immediately after the satellite symposium, Dr Ageno spoke about the clinical characteristics and management of 10,677 patients with a confirmed diagnosis of DVT and/or PE enrolled in GARFIELD-VTE at an oral presentation. The crowd took great interest in Dr Ageno’s presentation, as he indicated that there is a wide heterogeneity among VTE patients. He concluded that there should be a personalised approach to therapy.

Even at this early stage of data presentation, GARFIELD-VTE has made an impression in the thrombosis world, and ISTH 2017 was an excellent opportunity to showcase the initial findings and whet the appetites of people with an interest in venous thromboembolism. We look forward to sharing further insights and two-year outcomes data with you at ISTH 2019, in Melbourne, Australia.